Who are the biggest landowners in New York City?

An important and oftentimes conscientious aspect of a city’s social fabric is the way in which it houses its residents; you can learn a lot about a city from its real estate, and nowhere is this more true than it is in New York City.

In this post I use data from a combination of New York City Department of Planning and Department of Finance datasets (PLUTO and RPAD) to try to answer a question popular in the media: who are the biggest landowners in New York City?

If by "largest" you mean "owner of the most unique addresses", here are the top ten raw winners:

Somewhat unsurprisingly the single largest property-holder in New York City is city government, with various agencies taking all but one of the top 10 and most of the top 50 slots. The sole exception is sixth biggest property-owner OWNER / AGENT—a mildly alarming instance of indeterminate ownership in the public record. There is also an option for the 33 properties in the city for whom an owner is apparently simply UNKNOWN.

However, public asset ownership is a little haphazard. In additional to dedicated names for each of the individual city agenices there are several variations on "the City of New York" (CITY OF NEW YORK, THE CITY OF NEW YORK, etc.), and a similar situation exists for federal and state agencies, which are listed either individually or as part of the UNITED STATES GOVERNMENT, NEW YORK STATE, or even THE PEOPLE OF THE STATE OF NEW YORK.

It's easier for us to examine private entity data. A Q&A published in The New York Times in 1994 fingers Columbia University, NYU, Trinity Church, and a handful of developers as the biggest in terms of private addresses held. What does the picture look like today? Filtering out public services, here is what the public record has to say about the 20 private owners with the largest number of buildings:

In fact, the university's 206 properties easily trump both second-place finisher NYU, which owns 95 addresses, and for the purposes of comparison, the New York Public Library, which has 72—almost a third as many.

The following visualization lets you explore this in more detail:


Almost four-fifths of addresses in New York City are owned by organizations or individuals who own no other property.

To explore the raw data yourself, check out this Gist.

How does the picture change we look at square footage? That is, according to public record, who is the largest landowner in New York City?

If we combine "United States Of America" with all of the federal entities in the dataset—the postal service and so on—the federal government at large is probably the third largest landowner in the city.

The National Park Service on its own is fourth largest.

Focusing on private entities once more:

Once again we have a single outstanding result: Riverbay Corporation, which owns Co-Op City in the Bronx, is easily the largest landowner in New York City. Co-Op City's footprint is absolutely colossal. Approximately 43,000 people live there, a number large enough that, were it its own municipality, it would be the tenth largest in New York State.

Columbia and NYU at second and third are close competitors in terms of total space utilization, each using up around 15,000 single bedroom apartment's worth of space. St. John's University and Fordham University, two smaller schools with large outer-borough campuses, also make an appearance.

Housing cooperatives is general rate well here, though BPP ST Owner LLC, owner of Stuyvesant Town on the East Side of Manhattan and second-largest co-op on the list, is still less than half a Co-Op City in size.

Some of the largest skyscrapers in New York City make an appearance too: RCPI Holdo LLC (wonderfully descriptive name) owns the cumulative grandeur of Rockefeller Center, for example, while the Newton Street Corporation owns 55 Water Street, competitive with One World Trade Center (owned by the Port Authority and thus not on this list) in size.

You can drill into more details below.

To explore the raw data yourself check out this Gist.

Finally we arrive at what is perhaps the most telling metric of them all. Who's invested more in New York City real estate than anyone else?

Once again here is the raw top ten: 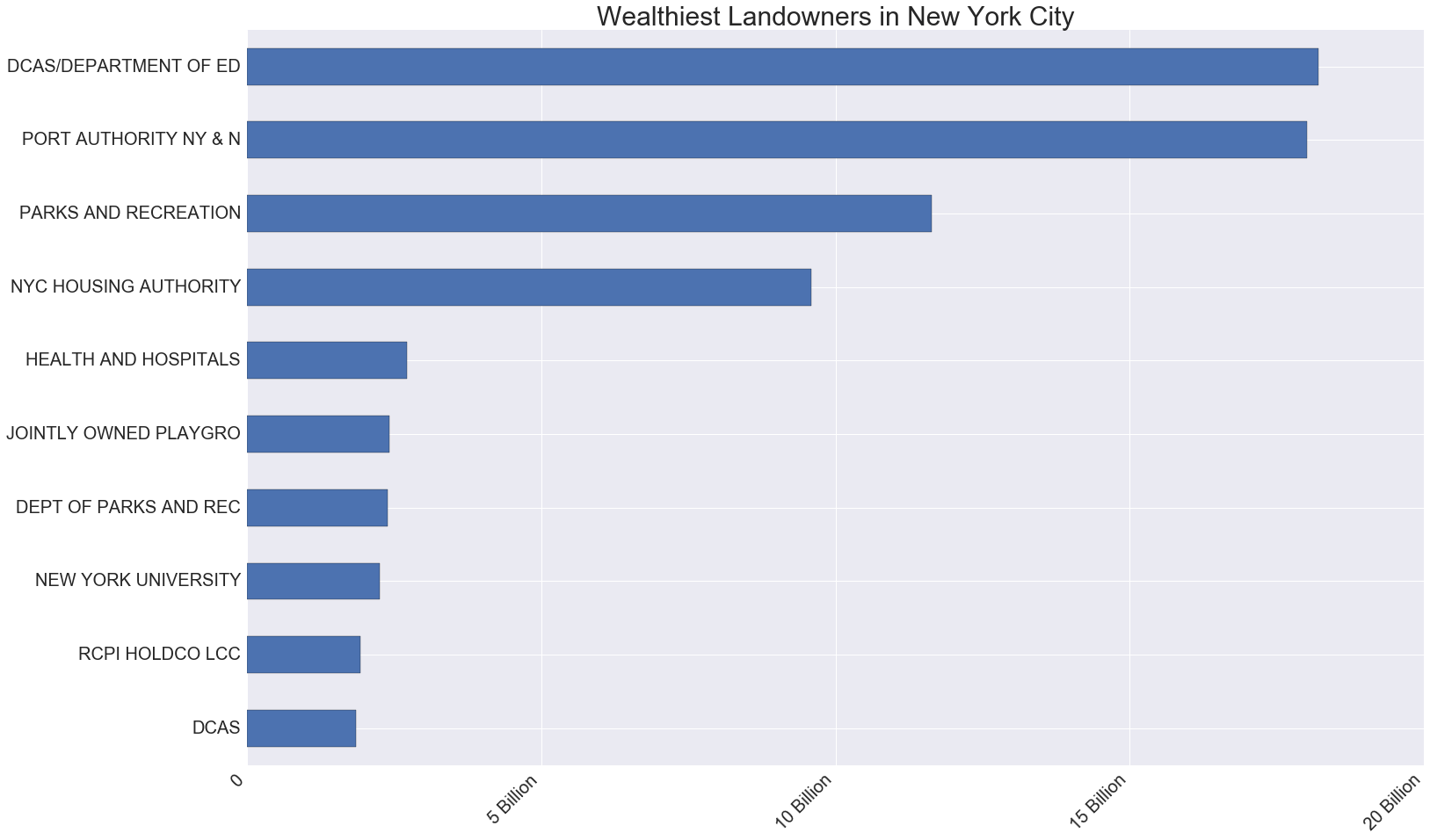 According to city government records, the richest landowner in New York City is the Department of Education—logical enough, it's the largest school system in the country. The Port Authority of New York and New Jersey follows closly, which seems strange: are bridges and tunnels really worth all that much? That is, until you realize that 99.99% of this valuation consists of just two properties: 154-68 BROOKVILLE BOULEVARD in Queens, better known as John F. Kennedy International Airport, worth 15 billion (ever try to sell an airport? me neither!); and 185 GREENWICH STREET in Manhattan, better known as One World Trade Center, worth 1.15 billion. Well, after hideous cost overruns, One World Trade Center famously cost 3.9 billion to build, so that fact alone is sobering.

The trouble with numbers this big is that after a certain point they lose meaning. It's easy to imagine what 100 thousand is, maybe you can stretch it to 1 million, but 10 billion? No way.

The building with the lowest signal-to-noise ratio of any building ever constructed in the history of humanity, ever, is the World Trade Center Transportation Hub, better known as the Oculus, a gleaming 4 billion dollar...train station...located right next to (the marginally less expensive) One World Trade Center. To hammer the point home, let's re-index the chart above by Oculuses built (or World Trade Centers completed, if you prefer): 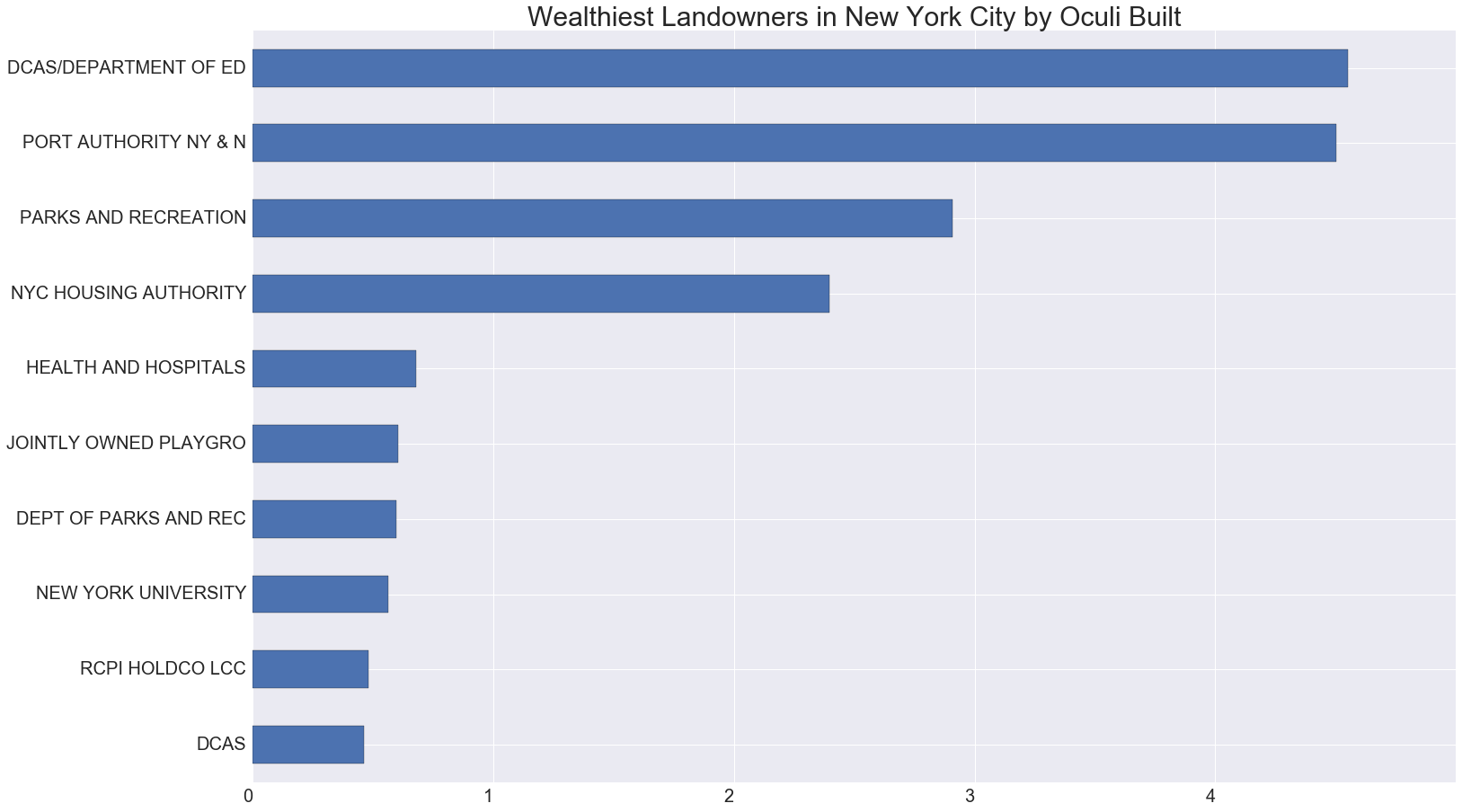 So if you liquidated every single public housing project in New York City (which, again, houses 400,000 people) you would earn yourself...just over 2 Oculi.

But on to the private count:

According to the public record, NYU is the wealthiest private landowner in New York City. Although Columbia University owns more units and more land than NYU, it does so in a quiet upper Manhattan location, while NYU's position in Washington Square Park puts it into one of the most expensive real estate markets in the city, and thereof, the world. This hands NYU the victory, with a small margin, in expense.

Perhaps this lends credence to concerns, oft-cited amongst disenchanted students, that NYU is a real estate business in disguise.

Trinity Church's holding company, TRINITY HUDSON HOLDING, weighs in at 1.02 billion dollars: a lot, certainly, but well short of the 2 billion figure cited as "wealthiest in New York City" in reports from a few years ago.

Aside from that, given that almost four-fifths of landowners in New York City only own a single property, it doesn't come as a surprise that owning a skyscraper in Manhattan is enough to make you one of the wealthiest real estate barons in New York City. Most of the rest of this list consists of holding companies, some eponymous, some not, for various skyscrapers and skyscraper complexes in New York City.

You can explore the full data below:

If you prefer to see the raw data for yourself, once again here's the link.

If you'd like to explore all of the visualizations above in one handy chart, go here.

Thus concludes my spiel on real estate wealth in New York City. In my next post I'll use PLUTO to explore the city's addressing system, so stay tuned for more!