The executive crisis at the Wikimedia Foundation

The news coming out of the Wikimedia Foundation, the steward of the Wikimedian projects (Wikipedia amongst them) has been entirely negative as of late, with a number of senior employees and executives past and present from within the Foundation now essentially in open revolt against the organization's leadership. The situation is most succinctly summarized in William Beautler's (as ever) terrific summary, "Search and destroy: the Knowledge Engine and the undoing of Lila Tretikov".

The HR team definitely keeps an eye on turnover on a regular basis. One of the first things I did when I started (approximately 3 months ago) is a stats health check including turnover trends, org demographics, compensation practices, recruiting stats, etc.

For turnover specifically, we parse and analyze by demographics, tenure, department, and reasons provided. We also compare it to market survey data (collected and provided by an independent third party) informing us what turnover of similar organizations looks like. Looking at turnover trends since 2012, beyond normal seasonality, the trend line is flat and our turnover is lower than market average.

Given the high profile and rancor of the Wikimedian staffers who had by that time already quit the Foundation, this was met with incredulity. A month and several more high-profile departures later this statement was finally forcefully contradicted by Gayle Karen Young, no less and no more then Dineva's immediate predecessor as chief executive of talent and culture, who stated that:

People will leave despite how much they love a place, its mission, and its volunteers at the point it becomes too painful for them to stay. And no one can make that decision for them. While the support of one's colleagues goes a very long way, it is necessary but not sufficient. I have been watching, even in pain and at a distance, the enormous toll it takes for people to go in day after day and keep doing their work when they have felt unsupported and unheard by the leadership, the board, and the movement, and uncertain of the strategy of the organization - and even worse, characterized as being the wrong people on the bus, so to speak - that this turnover is "normal" and part of leadership transition. This is not normal.

Dysfunction at the top does matter. It sets the tone for what is permissible in the organization. It is part of the leadership obligation to create an organizational and systemic environment in which people thrive, and feel aligned to the mission and the values of the organization. When that is absent, the resulting toxicity is downright unfair to ask people to continually endure.

How is that the perspectives of two HR chiefs, current and former, could be so shatteringly different? I parsed the Wikimedia Foundation's employment logs to demonstrate.

Here's what Dineva was looking at: 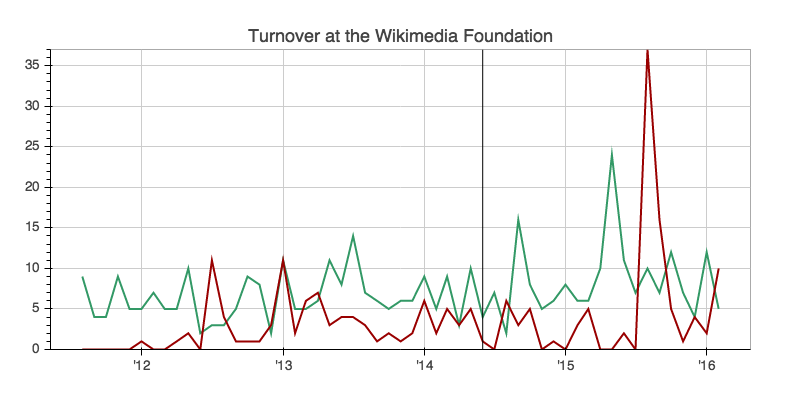 This chart tracks monthly comings and goings at the Wikimedia Foundation since mid-2011. The black vertical line indicates the date at which former director Sue Gardner passed the executive baton to the now-beleaguered Lila Tretikov. Hirings are in green, goings are in red. The large spikes in May and August are backdated comings and goings from the previous few months which were not properly accounted for in the public logs until someone realized they were missing.

The anomalous size of that "whoops" makes it hard to parse this chart, but no immediate downward trend in turnover is apparent. This is more readily graphically apparent if we reslice the information and visualize the cumulative employment at the Wikimedia Foundation: 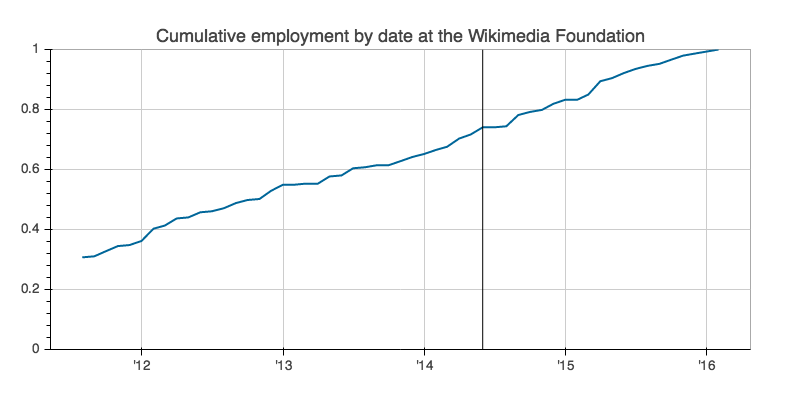 And what of Dineva's claim that the Wikimedia Foundation's attrition rate is below the industry average? Under Tretikov's leadership the Wikimedia Foundation has lost, on average, five employees per month. This comes out to an annualized 20% annualized attrition rate. That seems like a lot—until you realize that technology companies have the highest attrition rate of any industry (with Google and Amazon at the very top of the turnover tables). Indeed, 20% is on the low end of the 20-30% industry "rule of thumb".

This logic gets into a separate ontological issue about whether or not the Wikimedia Foundation is even a technology company in the first place, but comparative turnover to preceding executive director Sue Gardner is flat. Furthermore under Tretikov the Wikimedia Foundation has maintained a 35% annualized hire rate, resulting in 15% year-on-year growth.

The key insight here is that you can lose the faith of your employees, including your entire executive staff, and still not impact your company's macro-employment statistics. Foundation staffers are not doing it for the money—they are working for a non-profit, after all. Instead they are doing it because they believe in the organization's mission, and because they believe that the work that they do is meaningful in the wider sense of the word, in a way that a job paying twice as much at, say, Google, never would be.

Thus, as Young points out, in the case of executive dysfunction at the very top it is the executives just below that take the brunt of the damage. C-level staff responsible for maintaining the integrity and mission of their department can only bend the official line so far, and when the cognitive distance between what they believe in and what they are being made to do is too great they—decision-makers who would refuse to fall back on "just following orders"—will quit.

As the Signpost reported in January:

A key issue has been the WMF's annual evaluation of employee engagement, conducted and analyzed by a third-party consultant in late 2015. The results were made available on an internal office wiki, and it is now public knowledge that an internal discussion among staff has begun about making the survey public. As of publication, more than two dozen staff members have spoken in favor of releasing the survey as soon as possible "with no dissenting voices". The Signpost has been apprised of the results by one of their number. We understand that there was a healthy 93% response rate among some 240 staff. While numbers approached 90% for pride in working at the WMF and confidence in line managers, the responses to four propositions may raise eyebrows:

The Signpost has been informed that among the "C-levels" (members of the executive), only one has confidence in senior leadership. 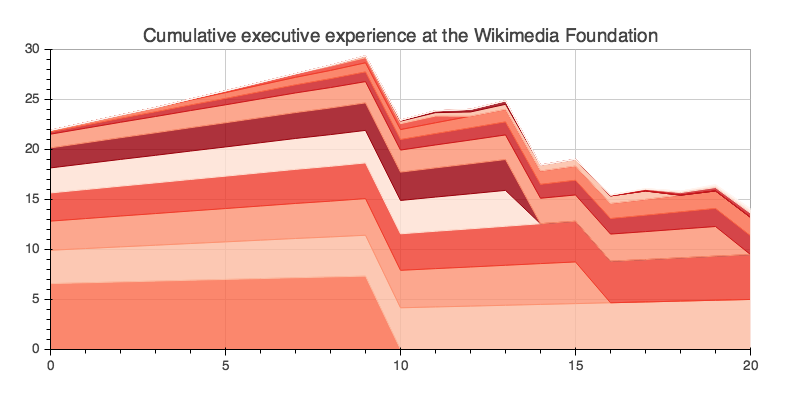 Dineva is a fairly new executive, and her appearance as the bastion of the party line earned her intense heckling, both public and private, from the field. Much of it is unwarranted—in the end, nothing she said was a lie after all. But statistics are a tool, not a panacea, and a more nuanced view of the situation bears out why the Wikimedia Foundation is now aflame: without the shielding presence of activist executives amongst the Wikimedian staff morale at the Foundation continues to collapse.

From my perspective and experience following the Wikimedia Foundation and speaking its staffers, the question of who is in the right here is at this point entirely conclusive. A vote of no confidence in one of or both executive director Lila Tretikov and the Board of Trustees now seems inevitable.

If you had asked me a year ago what state the Wikimedia Foundation is today, "burning to the ground" would not have been amongst my answers. Alas, that seems now to be precisely the case. I only hope that I have, in some small way, contributed to the conversation.