One of the most compelling trends in technology today is the open data and open governance movement. It's not without reason that no less than Tim Berners-Lee himself, the creator of the worldwide web and one of the most preeminent scholars of the Internet, is doing his latest work in getting more government data on the web: in an interview with The New York Times a few years ago he spoke to how even records as mundane as traffic statistics or weather data could drive tinkerers to "make government run better".

New York City has been at the forefront of this movement: mayor Bloomberg (you know, the guy that founded the largest multinational information broker in the world) formalized a citywide analytics team as the Mayor's Office for Data Analytics in 2013, and the effort has continued under Mayor De Blasio, with the city cementing its first Open Data Plan in July 2015. The resultant NYC Open Data Portal is populated with over 1300 well-maintained datasets.

One of the most hotly requested of these is the motor vehicle collision dataset, a record of all motor vehicle collisions recorded by the NYPD going back to January 2012. This data was so hotly desired (by everyone from journalists to computer geeks) that prior to release an entire scaper project existed for recompiling and enriching incident reports which had previously been locked into PDFs (where data goes to die) or unavailable except by legal request.

For this project I looked at how this crash data can be used to reduce traffic fatalaties in New York City. The challenge: use data to find ways of helping to reduce the number of fatal crashes in New York City. Massive credit goes here to classmate, teammate, and fellow math nerd Anthony Campanello, who did the wet-work of actually generating the visualization used for this project.

The Mean Streets Project recorded a total of 242 fatal traffic crashes in 2015, a historic low for the city in a figure that has been in slow decline as the years go by. Minimizing this figure, under the auspices of the Vision Zero campaign, has been one of the key aims of the De Blasio administration; this included initiatives like lowering the Manhattan speed limit to 25 MPH (from 30 MPH), and the initiative overall is seen as having been modestly successful in its aims.

Every time the NYPD is called to the site of a traffic accident, the responding officer fills out and files a MV-104AN report. This is a chunky form (which you can examine yourself) with thirty mostly numerical values to fill in, ranging from pedestrian action at time of incident and apparent contributing factors to the physical condition of the victim(s). This information has been compressed, for the purposes of anonymization and analysis, into date, time, coordinates, streets, vehicle types, and contributing factors.

There are over 750,000 data points in the dataset (769054 in this analysis), representing crash reporting going all the way back to January 2012. Not every accident results in a report: the NYPD are called to the scene of an accident usually only specifically when it is useful, for insurance purposes, for there to exist a record of the accident, and so there is likely some number of unreported self-induced accidents—the NYPD form calls these "collisions with fixed objects"—which are not represented in the dataset.

Officers file geographic information in terms of the street or intersection at which the accident occurred, so it's unclear how the coordinates in the dataset were geocoded. Date, time, contributing factors, and the distribution of injuries or deaths are the only columns present in every data point. Some data points lack coordinate data but have street data, some lack street data but have coordinate data, and some lack both. As expected, it's a bit of a mess: there are even a number of rows which do not indict any vehicle at all in the accident! The number of records for each column is summarized in the table below.

As expected, the data took a little bit of effort to clean up and enrich. I used Python to merge the date and time columns into a single datetime column and used the Google Geocoding API to attach coordinates to recorded fatalaties which had street data but lacked coordinates, of which there are approximately 150 (!). In a few cases there were records in which fatalities occurred but for which there was no geographic information whatsoever. That data was definitely present in the filing officers' reports—it's almost shameful that such empty entries exist in the publicly accessible dataset!!!

Reams and reams and reams of reports, filings, and research studies have been done on the causes and trends behind vehicular deaths in New York City and the wider world alike. The causes and outcomes of automobile accidents are well-known and hard to address, and we found it easier to focus on an aspect of the problem which is easier to fix—its geography.

We used Tableau to examine traffic fatality hotspots in the city. In the following visualization, the number of accidents tagged to a particular location is represented by size: the more reports, the wider the circle. The color of the circles, on the other hand, indicates the fatalness at that location: the redder the circle, the higher the average number of deaths per accident. Together this provides us with a summary of especially dangerous accident locations in the city.

The larger and brighter the circle, the stronger the evidence that that specific location is inherently unsafe—and needs addressing.

Use the "Average Fatalness" filter to adjust the range of dangerousness represented in the data: if you set the minimum to 0.0 the software will plot every single accident in the city; if you set the maximum to 1.0 it will include "singleton points", places where only a single accident occurred but that lone accident was deadly. Use the "Count" filter to filter the number of accidents per site: again, setting this to 1 will plot every single point, while raising it to a high value will plot only the most accident-prone locations.

This visualization is of course not definitive, but it gives us a basis from which to begin investigating particularly outstanding points to see what makes them problematic.

To get a feeling for the type of analysis that one might now want to do, let's take a look at an example accident hotspot in the city.

The following location, the site of 44 accidents in the past four-and-a-half years, was the site of a particularly deadly accident which killed five—single-handedly making it the location of more motor accident deaths than any other in New York City. 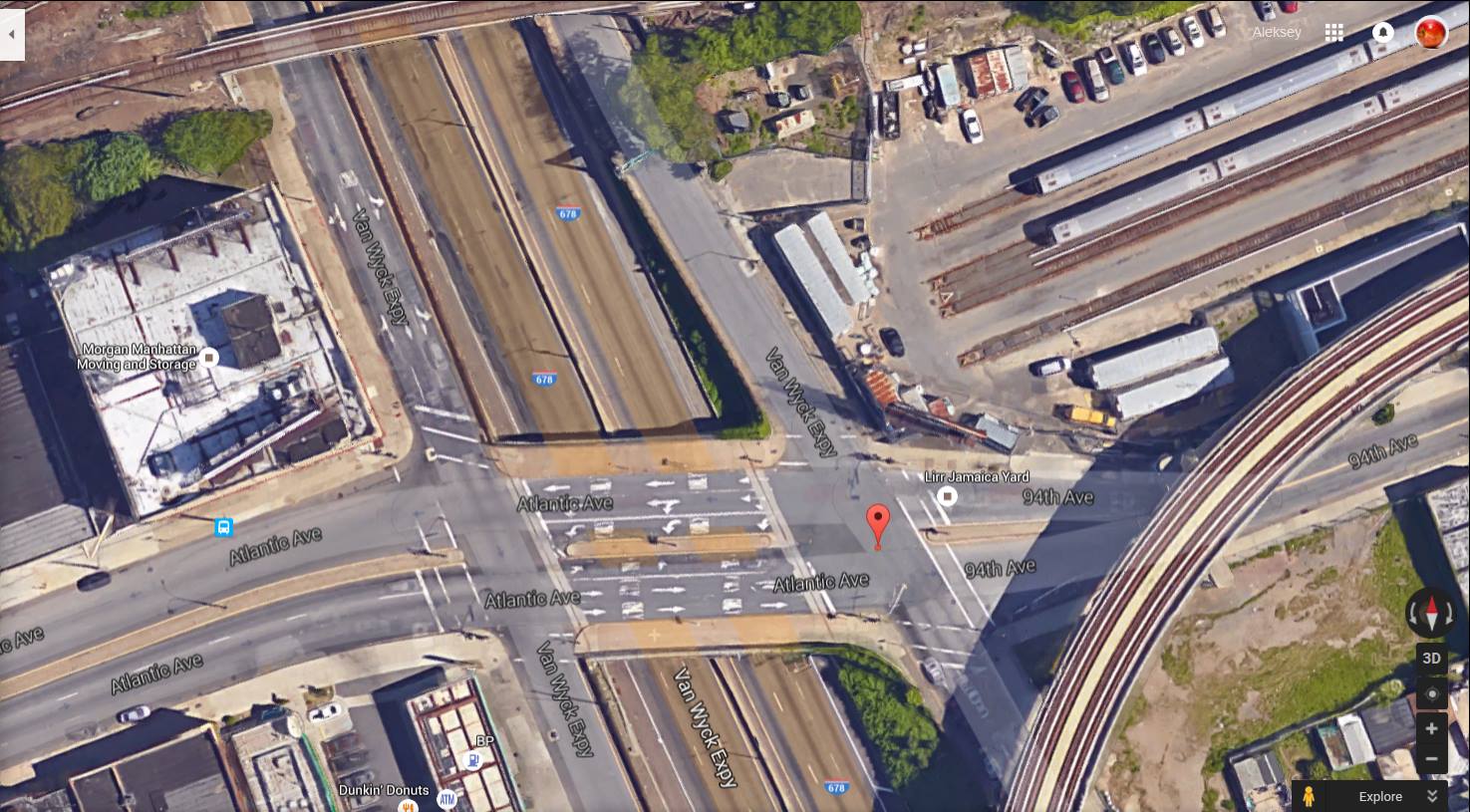 A short traffic-controlled overpass on a major street (Atlantic Avenue) merging into a single lane, intersecting the entrance onto a major expressway (the Van Wyck), with the bonus industrial chic of a train overpass into an adjacent train yard? Yikes!

The highest fatalness occurs at locations which have only suffered a single accident, but for which that lone accident was deadly: there are nine such points in the city, corresponding with a fatalness of 1.0. However, a single accident is not in and of itself strong evidence that a particular location is dangerous: this is much more likely to be a case in which external factors, like speeding or drunk driving, were predominant.

For this reason it is necessary to augment this metric with an understanding of the number of accidents at the location. The interpretative difficulty is that deadly accidents are a fundamentally rare event: a location which happens to have suffered two fatal accidents will at first glance appear to be twice as deadly as another neighboring one which suffered one, or none, even though (as often happens) that other location might actually be more accident prone than its neighbor (in terms of the number of collisions recorded).

Approximately 0.1225% percent of motor accidents are deadly (942 records out of 769,054 total). However, highly accident-prone areas are safer than average, presumably because more thought and more effort has gone, on the part of traffic controllers and of the community alike, towards improving traffic flow there. So while the chances of getting into an accident getting onto the Manhattan, Brooklyn, or Queensboro bridges is alarmingly high, the chances of worse are tiny. This leads to the following counter-intuitive observation:

The most accident-prone locations in New York City are approximately half as dangerous as average.

The intersection in our case study is the only place in the city to have suffered five deaths; another location at the water's edge in Astoria killed four in 2014. There are three locations which suffered three fatalities, a small enough number that these accident locations can be ascribed to chance. 25 locations have been the site of two deaths and 912 have been the site of one deaths, for a total of 980 geographically-isolatable fatalities.

There are no points in New York City which are in and of themselves outstandingly dangerous, and so there's no way to say concretely that any one location is "the worst"—and, thankfully, this is to be expected, as any such location would have either long ago been addressed, or, more likely, never have been built at all.

Preventing accident pile-on points, on the other hand, seems to have proven to be a much harder task; but if our goal is to reduce traffic fatalities, accident hotspots, though interesting in and of themselves (and the subject of my next post!), are a red herring.

Our data indicates that the bulk of the addressable traffic fatality risk in New York City is diffusely distributed amongst moderately-active local streets.

Thus though there are no commanding "it points" to be revealed in the data, this visualization is nevertheless useful for is constructing a neighborhood-level understanding of which areas and intersections in the area are most troubling. Try browsing through your own neighborhood, workplace, or commute. What areas did you expect would be problematic? Were you correct in your supposition? Which areas surprised you? Why is that?

Find something interesting? Leave a message in the comment so that we can all hear about it!

This post is the first of a two-part series dissecting motor vehicle collisions in New York City: for the second part go here.