The worst places to drive in New York City

Some roads are pleasure to drive on, but in New York City—where everyone always seems to be in a rush to get somewhere, yet magically standing still—that rarely happens. Rare pleasures like the green wave (did you know that you can theoretically drive 55 streets in 6 minutes?) are drowned out by a sea of traffic logjams, itchy drivers, and, inevitably, automobile accidents.

For this analysis I focused on the raw numbers behind New York City's traffic accident distribution, using data from the city's publicly available motor vehicle collision dataset to map out the twenty-five worst intersections in the city, presented below.

You can try playing around with this visualization yourself: be sure to use the filter tab at right to adjust the size of the accident hotspots that you want to plot.

This data tells us some very interesting things.

Getting in and out of Manhattan is hazardous 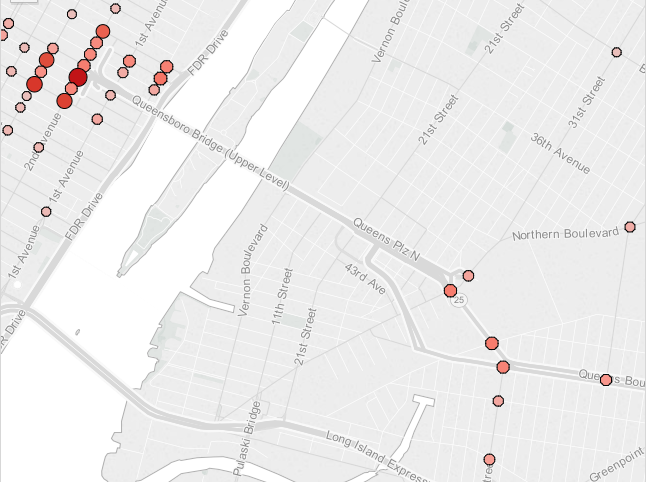 It should come as no surprise that many of the worst traffic intersections in the city are near on- and off-ramps of major bridges and tunnels.

The intersection of Tillary Street and Flatbush Avenue in DUMBO—serving triple duty as the on-ramp to the Manhattan Bridge, access road to the Brooklyn Bridge, and off-ramp of the the Brooklyn-Queens Expressway carrying commutters tither—is the most accident-prone place in New York City, averaging 180 incidents a year. One wonders how tired the local NYPD precinct—located quite literally down the block—gets of getting called to this location.

The second worst place to drive in New York City is squarely in the center of its worst stretch—the Manhattan side of the Queensboro bridge, which peaks at 150 accidents a year on 2nd Avenue and East 59th, but spreads the pain out against a whopping 600 of them in between 57th and 63th on 2nd.

Another major uh-oh point is the intersection of Bowery and Delancey streets, where residual traffic from the off-ramps of the Williamsburg and Manhattan bridges butt into one another, producing the sixth worst intersection in the city, with about 115 accidents a year.

The Holland Tunnel barely registers a blip, whilst the Manhattan ends of the Queens-Midtown and Lincoln tunnels both weigh in at approximately 100 accidents a year.

Some Manhattan streets are worse than others 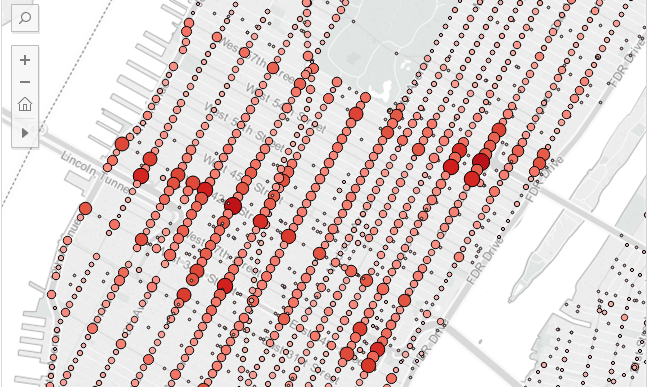 When it comes to traffic collisions, Manhattan avenues fair much better than certain streets, something that, given the much higher traffic load that avenues carry, might come as a surprise. Easily the worst of these is the site of the third-worst intersection in the city, with over 140 collisions a year: West 42nd Street and 8th Avenue, one block west of Times Square. The entirety of West 42nd Street sees over 1200 accidents a year—by comparison 43rd Street, just one block up, sees around 350.

Certain outer-borough arterial roads are worse than others 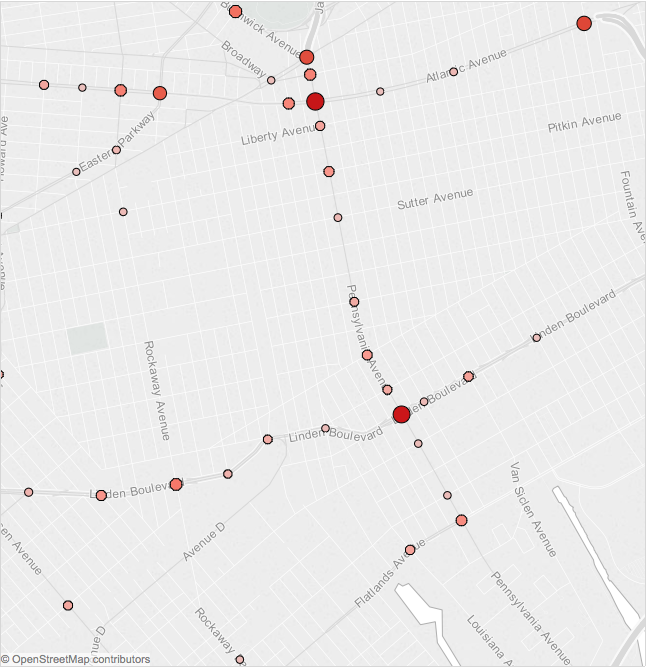 The fourth and fifth -worst intersections in New York City take us to the outer boroughs, specifically the intersections of Atlantic and Linder Boluveard with Pennsylvania Avenue, at the border of Brooklyn and Queens. These are the intersections of local roads carrying almost exclusively passenger vehicle traffic, generating about 130 accidents a year just twelve blocks from one another. The culprit is likely westbound traffic from JFK, for which this is the most convenient route both to greater Brooklyn and Manhattan beyond.

For those heading into greater Queens, the triple intersection of Bushwick Avenue, Jamacia Avenue, and Jackie Robinson Parkway just two blocks north creates another 90 accidents a year, as does the end of Conduit Boulevard, which quite literally conduits JKF traffic onto Atlantic, and the intersection of Erksine Street with Seaview Avenue to the south, which manages to do a particularly poor job conducting local traffic on and off the otherwise sanguine Belt Parkway.

The remaining top 25 is rounded out by showings from elsewhere in the outer boroughs. Queens and Woodhaven Boulevards create such a jam in front of Queens Center Mall, thanks to service from both Queens Boulevard and the Long Island Expressway. One surprising hotspot is in the Bronx, at East 138th Street and Alexander Avenue, an otherwise unassuming intersection with horizontal parking which happens to be located smack dab in front of a police precinct.

This post is the second of a two-part series dissecting motor vehicle collisions in New York City: for the first part go here.

You may have also seen this post in the media—it was republished in DNAinfo and elsewhere.