Null and missing data in Python

One of the most important realizations of working with information is that data never comes neatly organized. Real world data is, merely by its numerical nature, invariably messy, requiring significant clean-up (and oftentimes domain expertise) to render usable. This is data noise.

Almost all datasets contain some noise, and the less noise there is, the better ("cleaner") the dataset. Some kinds of noise are easier to correct than others; sometimes removing the noise completely is simply impossible and all you can do is resample or hope for the best, keeping in mind that when garbage goes in, garbage comes out.

This post explores a form of both noise and not-noise that's often discussed but rarely quantified, and critical to understand: null data. We'll dive into nullity semantics, look at why these representations are useful, discuss the technical implementation and limitations of nullity in Python, and look at a few practical examples.

So what is null data?

What is null data? Let's take an illustrative example. Suppose you had the following data (a sample of columns from the NYPD Motor Vehicle Collision Dataset):

Each of these records corresponds with an accident reported and tended to by the New York City Police Department (NYPD) with some concrete location. Yet as this selection shows, some records are completely missing this data!

This is an example of missing data—data that we know exists, but which, due to sparse or incomplete data collection, we do not actually know the value of.

Here's another example (from an excellent New York Times article):

Notice that there are certain counties in this map—one in Georgia, one in Texas, and so on—which lack data. This isn't because there isn't income inequality in these areas. Rather there is some sort of data there that defied measurement, making these counties once again instances of missing data.

But not all data is merely incomplete. Sometimes it really doesn't exist. Let's return to our earlier NYPD dataset:

A collision location is recorded as a combination of ON STREET and CROSS STREET in incidents in which cars collide mid-street or mid-avenue. But not all collisions occur on streets; some occur OFF STREET, like, say, in parking lots.

Then the other columns don't carry any informational content at all. They exemplify non-data. 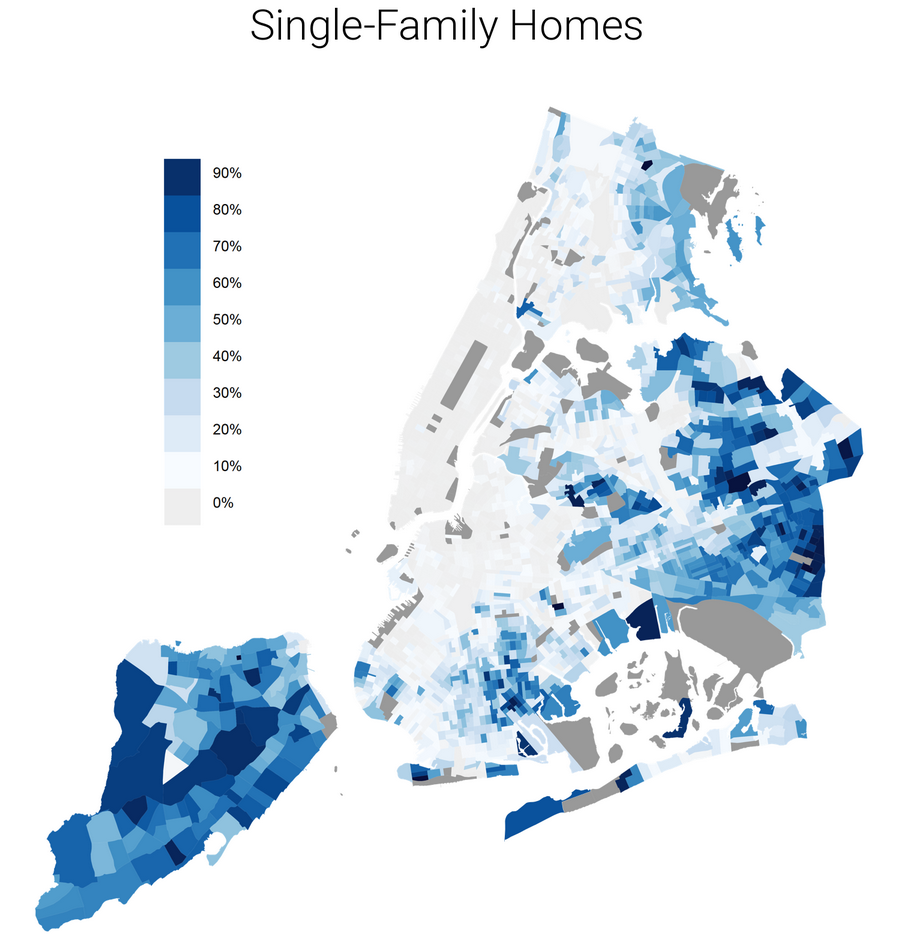 Notice that there are certain areas, like Central Park, which are grayed out. These public areas simply do not contain residential property sales at all. You can't divide by zero—these areas are again examples of non-data.

This means that when answering the question "is this data entry filled?" one must actually consider three possible answers: "Yes", "No, but it can be", and "No, and it cannot be".

Why does null data matter?

Non-data isn't erroneous—it's existentially undefined, part of the structure of the data you are working with. Missing data, meanwhile, is a question of actionability: is this data noise something that I, the programmer, can reasonably attempt to correct?

Data missing at random is a nullity pattern which occurs randomly. For example, in the motor vehicle collision dataset above we may reasonably assume that observations missing collision streetnames are randomly distributed throughout the police precincts.

In the simple case of having a sufficiently large number of observations for such data to be statistically irrelevant, you can safely drop these observations using e.g. pd.DataFrame.drop().

Far more troubling is data not missing at random. For example, for the motor vehicle collision dataset I discovered that NYPD officers merely provide streetnames in their collision reports—the LOCATION column is geocoded from there. Since ROOSEVELT AVENUE AND 83 STREET is far easier to geocode than PARKING LOT OF 79-15 MAIN STREET is, off-street collisions are missing coordinate data at a higher rate than on-street collisions, a difference in nullity pattern which absolutely must be taken into account in interpreting the dataset as a whole.

And when you know or have reason to believe that data is not missing at random, dropping the data and modeling what's left would result in falsehoods, ignoring a potentially important determinant variable or variables which, for convenience's sake, you have simply deleted. In these cases interpolation techniques become a necessity—pandas has a whole tutorial on the subject.

There's a lot of definitions floating around at this point, so here's a sketch of what to keep in mind:

How is null data implemented in Python?

R is the only programming language which handles null semantics with what is known as a true NA. In R there is a distinction between null values and NA values, allowing R users to easily implement the distinction between missing data and non-data with very little mental overhead.

Most every other programming language, Python included, has only a single null datatype: None (or float.NaN) in Python. This means that Python programs have to virtualize NA ourselves somehow. Generally speaking there are two ways of doing this.

The first method is to use a sentinel value, a special bit pattern in the data column's native type flagging a missing value. This is a traditional way of indicating missing data—recording unknown income as -99 or an unknown year as 0, for example—which is used in-place (hopefully with documentation!) by many datasets.

This should seem familiar:

The trouble is that sentinal values are in no way durable. -99 could be a valid year and 0 could be a valid income! Without a special reserved keyword, a sentinel robs you of a value that you might otherwise want to use. They have to be considered on a case-by-case, column-by-column basis, a burdensome thing.

The second method is to use a mask: a separate boolean array to "mask" the data whenever missing data needs to be represented. The advantage here is that since your nullity pattern is encoded (quite literally) in a whole second array you don't need to reserve any representations in your core data, meaning that this design pattern is more robust:

The disadvantage is that now you've got a whole second object to tend to—trading complexity and performance for durability.

The numerical core of the Python scientific library and the level at which this problem ought to be mediated is the numpy library, which defines all of the efficient linear algebra and matrix manipulation methods necessary for computerized computations. numpy provides np.nan, a computationally improved version of Python's base None, but it does not provide a true NA datatype!

numpy does provide a mask, the numpy.ma module, which implements a masked ndarray subtype called MaskedArray. But this implementation is not performant enough, for whatever reason, for general purpose use.

This issue has proved to be conscientious. In a document summarizing the great NA debate numpy core developers stated that:

After R, numpy.ma is probably the most mature source of experience on missing-data-related APIs...while it seems to be generally considered sub-optimal for general use, it’s hard to pin down whether this is because the API is immature but basically good, or the API is fundamentally broken, or the API is great but the code should be faster, or what. We looked at some of those users to try and get a better idea...

...these examples make it clear that there is demand for a convenient way to keep a data array and a mask array (or even a floating point array) bundled up together and “aligned”. But they don’t tell us much about what semantics the resulting object should have with respect to ufuncs and friends.

This reflection hits the nail on the head. By failing to coerce a true NA type as a part of its standard API numpy fails to standardize and routinize handling the data it ought to represent, forcing users and packages using numpy to track both objects themselves instead.

This proves to be such a big burden that the pandas library, the workhorse of data-driven Python (built atop numpy) actually eschews using the ma mask!

It actually takes a step backwards, coercing all null data into NaN (or NaT, a thin time-series wrapper).

The choice of using NaN internally to denote missing data was largely for simplicity and performance reasons...we are hopeful that NumPy will soon be able to provide a native NA type solution (similar to R) performant enough to be used in pandas.

In "Python for Data Analytics" Wes McKinney, the creator of pandas, states further:

I do not claim that pandas's NA representation is optimal, but it is simple and reasonably consistent. It's the best solution, with good all-around performance characteristics and a simple API, that I could concoct in the absence of a true NA data type or bit pattern in NumPy's data types. Ongoing development work in NumPy may change this in the future.

Nevertheless this situation stands today. Most of the time it is up to you, the developer, to keep track of your data nullity pattern yourself. For instance in answering a question about nullity in Python machine learning a core scikit-learn developer had to say:

Scikit-learn doesn't handle missing values currently. For most machine learning algorithms, it is unclear how to handle missing values, and so we rely on the user of handling them prior to giving them to the algorithm. Numpy doesn't have a "missing" value. Pandas uses NaN, but inside numeric algorithms that might lead to confusion. It is possible to use masked arrays, but we don't do that in scikit-learn (yet).

Our one null datatype simply cannot stretch to cover both of our use cases, missing data and non-data, creating ambiguity that in turn imposes limitations in the input that various packages will accept. This shifts the burden of representation onto the programmer, forcing us to keep track of what is data and what isn't and what is valid input and what isn't ourselves.

What is the alternative? In an ideal, NA-driven world, Python developers could import the dataset, plug in NA and NaN values in once, and then forget about it:

I wouldn't need to worry about keeping track of or denoting null locations being missing and null streets being structural because that fact is immediately obvious from the data. Any modules I ship the data to will know that, too, and handle it autonomously and/or expose finer-grained tools—fillna, dropnan and isnull—for massaging things into shape.

But such a far-reaching change would require serious re-thinking of numpy code, which—so far—hasn't happened.

8/9/2016 Update: Wes McKinney is moving towards a stronger stance on this issue: in the just-published next-gen Pandas 2.0 Goals he states that data containing missing (NA) values may require explicit conversion where it is not currently required...I trust this will be seen as a positive development."