To start with let's take a look at the number of addresses by borough:

Queens and Brooklyn together comprise 70% of the addresses in New York City. Manhattan by contrast provides just 5% of them, while Staten Island and the Bronx split the remaining difference at around 12.5% each. In other words, for every 20 addresses 1 is in Manhattan, 2 are in the Bronx, 3 are in Staten Island, 6 are in Brooklyn, and 8 are in Queens.

The scale of the difference between the number of residences in Manhattan and the number in the other boroughs is surprising, but remember: Manhattan squeezes about two-thirds the population of Queens onto an island one-quarter the size.

A city block in Manhattan is wider than it is long, with each horizontal avenue measuring out approximately three diagonal streets in length. Using a figure given by The New York Times in 2006 (if you like this sort of thing—I know I do—also check out the breakdown given in the 1892 World Almanac), this makes for 140 streets per square mile. By summing up the total lot areas and filtering out parks and greenspaces we can measure the average number of properties per city block by borough:

Brooklyn is easily the densest of the boroughs, packing twice as many addresses per block as Manhattan, the land of skyscrapers.

Staten Island is comparably dense with Manhattan. Staten Island is the most suburban of the five boroughs, so lots there are larger as a natural consequence of its lower population density. The Bronx by contrast, is the most consolidated of the outer boroughs.

These facts becomes easy to see if we swap to measuring density by number of persons per address:

Manhattan absolutely crushes this ranking, packing fifteen times as many people per address (61) as Staten Island does (4)! If you ever wondered why people try so hard to live in "the City", this is why.

Queens fits somewhat fewer people (2.3 versus 2.6 million) onto a significantly greater area (109 versus 71 square miles), yet—as a consequence of having such a smaller lot size—Brooklyn nevertheless has a comparable number of residents per building (approximately 5 residents per address).

If we mix these two metrics up we can compute the average number of people per block for each of the boroughs:

Though Brooklyn and Queens again swap places, the overall picture is about the same.

Now that we're done counting addresses let's examine what they actually look like, starting with their length.

Not every property in New York City has an address: parks don't, for instance, nor do many empty lots, though others get assigned the name of the nearest street. There are also a handful of "other options" in the dataset as well: for instance there are several entities addressed as BODY OF WATER, and at least one, I kid you not, CLIFF.

Let's assume that a valid address is of the form 120 COURT STREET, that is, an address number followed by at least two strings seperate strings for the street. There's one important exception to this rule—Manhattan piers are simply a pier and a number, e.g. PIER 19. We'll include those, too.

It seems that address lengths are approximately normally distributed in New York City, and surprisingly tightly so: half of the addresses in New York City are 14, 15, or 16 non-space characters long.

There is no single shortest address in New York City: there are a number of two-number piers, e.g. PIER 40 etc. Following up on these, there are a sizable number of short place-names, such as 74 6 ROAD in Queens or 5 3 PLACE in Brooklyn, which seem to occur mostly in these two boroughs.

There is also no single longest address: there are over a hundred addresses in Queens on Woodhaven Boulevard with names like 103-29A WOODHAVEN BOULEVARD which take the prize for longest in the city.

Let's tokenize address endings to see which words (excluding individual numbers and letters) are most common. Amazingly there are just 100 of them in the entire city! Here's a work cloud with every single option: 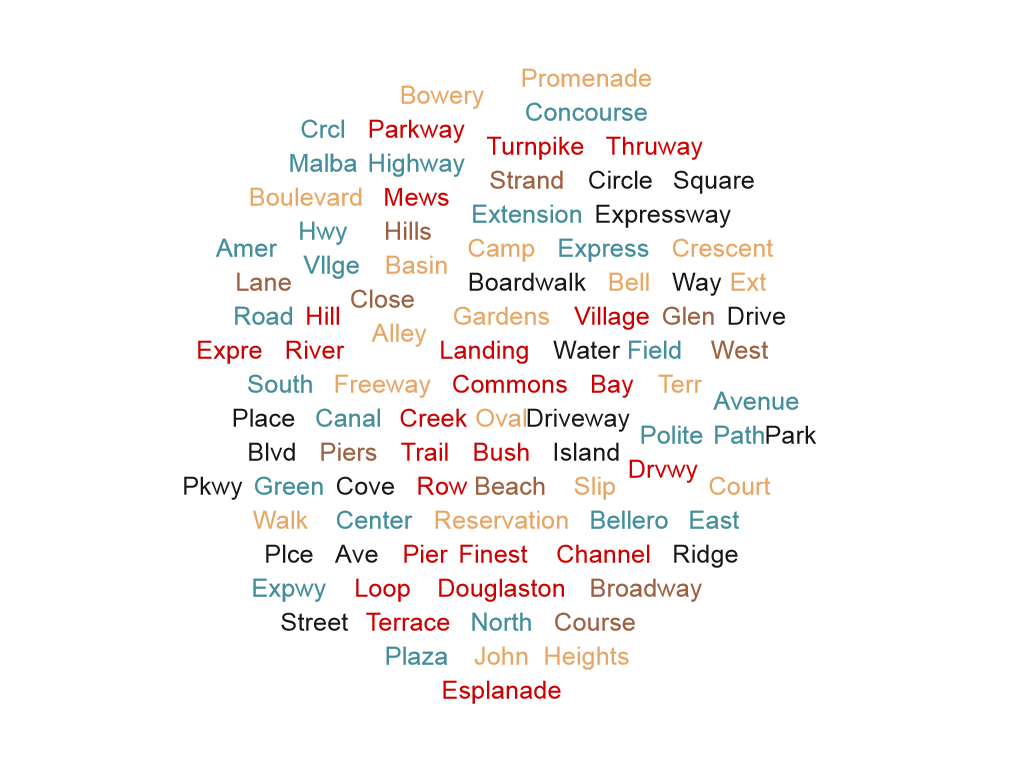 Of course a handful of these endings dominate the entire set:

Indeed, place-name endings have very little variety. 82% of the addresses in New York City end in either "Street" or "Avenue".

Broadway appears on the list above because of its almost unique habit of naming addresses all on its own: whilst a building on another avenue would be "123 3rd Avenue", when they are on Broadway they are more usually, though not always, simply 123 Broadway. Combined with the fact that the Broadway is the longest street in New York City, this makes Broadway one of the more heavily addressed street in New York City, with 1118 addresses overall.

Expanding on this observation, here are the five most heavily addressed streets in each borough: 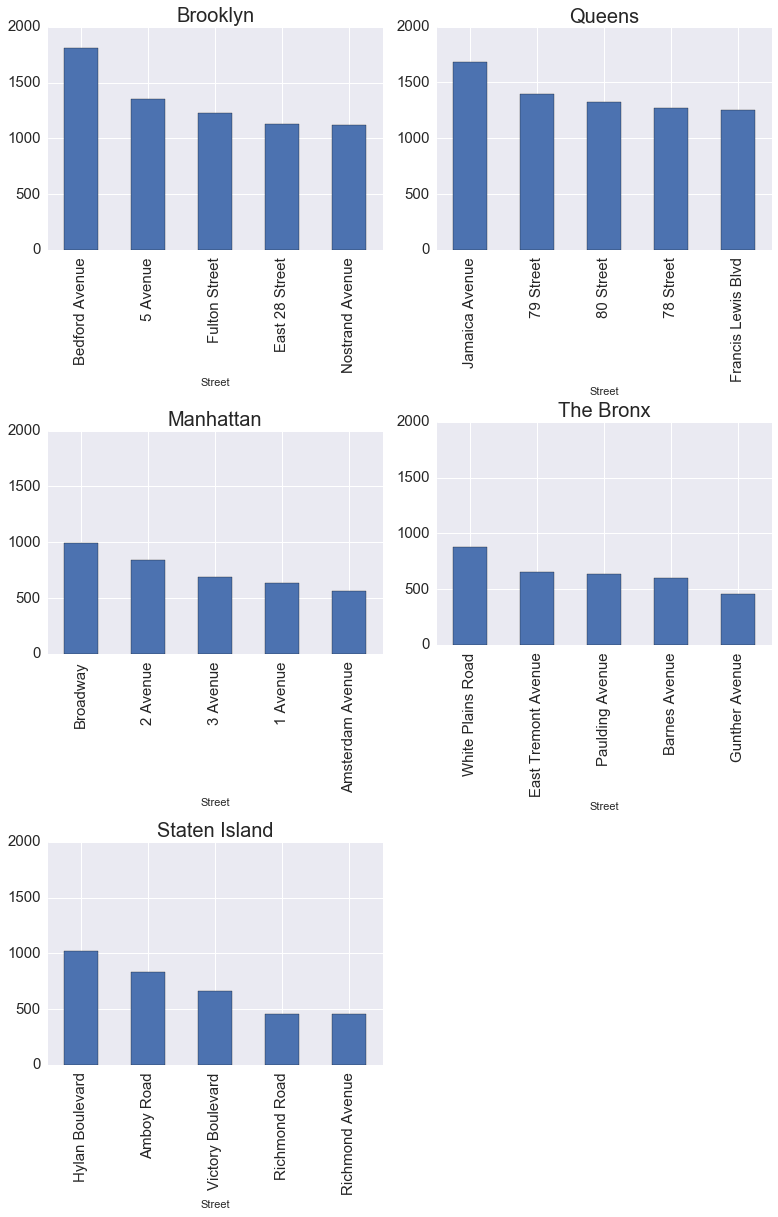 But this analysis is highly limited. Not only is addressing not totally correlated with length, but we've also constrained ourselves by naively examining streets on a per-borough basis. But we have a complete record not only of the addresses associated with each street but also of their coordinates—can't we take that and somehow transform it into a representation of the streets themselves?

This is an algorithmically interesting question with a very non-trivial solution that I thought I would say a few words about for the interested. Using Broadway as our (above averagely complex) test case, here are the points that I start with: 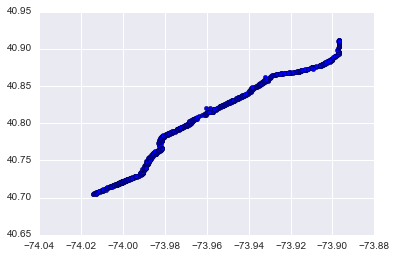 This is just a cloud of points in no particular order; to get a line out of it we first have to order it somehow. We can achieve this by fitting a linear regressor to the point cloud, then calculating a rolling average of centroids for each five-tuple of points to shift the center of mass onto the street (instead of on the buildings besides it). Finally we run the points through the Visvalingam line simplification algorithm to get our final result—one reasonably well-fitted, reasonably simple Broadway street polyline: 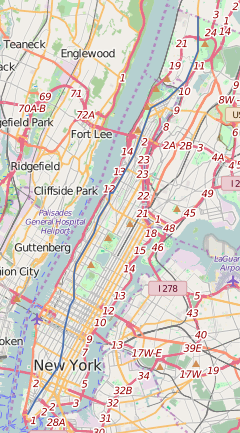 This is a pretty interesting result. Give me the name of any street in New York City and I can give you the polyline encoding it! Let's use this tool to look at street lengths in New York City. If you sort all of the streets in New York City by length you get a neat if slightly exaggerated exponential curve:

And so finally—the ten longest streets in New York City (units in miles):

Want more? Ben Wellington of IQuantNY awhile ago published analyses on Manhattan addressing and street ending tions that are well worth reading!